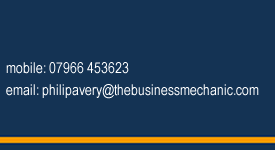 The sad truth is that excellence makes people nervous.

They always say time changes things, but you actually have to change them yourself.

An interview with Philip Avery

MR: How did you get into this line of work?

PA: I was a commercial lawyer for over 20 years and, although I loved it, I was always interested in the practical side of what made a business work. I frequently found myself saying "Yes, that’s the legal answer but what’s the practical effect of it? Is that what you want?" Then, in the economic downturn of the late 80s, I became a sort of corporate undertaker as many businesses failed – and we didn’t know the reasons why some did and others didn’t. There was an unspoken (and sometimes spoken) belief in the air that the ones that survived and their owners/managers were superior and we were witnessing some sort of Darwinian natural selection.

I became fascinated by the deeper workings of business and started to see that there were basic but simple principles at work here of which the failing companies were unaware or at least not embracing. But it also became clear that neither were most of the surviving companies – they had avoided the pitfalls in their path by luck!

Since then, I have worked to uncover and study these principles, pared them to their essences and presented them in ways that all owners and managers can make immediate use of.

MR: What is your working philosophy?

PA: When I was a boy, my father always quoted the author of Calculus Made Simple, Sylvanus P. Thompson, "What one fool can do, another can". That’s always stayed with me. The difference between the expert and the average person is simply knowledge, and experience in applying it. And we have to remember that this knowledge is all acquired – nobody is born with it.

I see my job as distilling business knowledge and helping my clients implement this knowledge to their best advantage.

All businesses are the same underneath it all – the differences between them are differences in activity and scale but they are all faced with a lack of time to do everything and this becomes more acute for smaller businesses. I believe that all structures and processes should be as small as possible to produce the desired result. Of course, that assumes we actually know what the desired result is... Above all, this should all be enjoyable, exciting, rewarding and make a real difference.

MR: What are your proudest achievements as a professional?

PA: Seeing the ‘Aha’ look in a client’s eyes as they suddenly realise what they can do to make a difference to their business – the moment they realise that the change can really help. Or getting an excited phone call saying that the system we have just put in place is working brilliantly.

Businesses must change if they are going to improve themselves.

I had a call from a client recently who was having problems with two managers who simply would not report for months to the board because of the ‘usual’problems – too much work, other priorities, etc. I explained about the new management technique I have developed called ‘Line of Least Resistance Management’ and suggested a very simple approach that required no work or effort on his part. I had a call later to say that not only had the two produced their report, it was full of practical suggestions for improvements. The same people, just a small tweak.

Running a business is often a very lonely thing, even for the CEOs of large companies. At heart I am a teacher who also likes making things work, hence ‘The Business Mechanic’.

MR: So, why is your business called The Business Mechanic?

PA: Some years ago I was working with a consultancy group and a few of us were chatting about what we did. It happens that all the rest were from engineering backgrounds and somebody said, ‘We’re really business engineers’. As I was driving home I thought about this and realised that what I enjoyed was rolling up my sleeves and getting my hands dirty, oil under my finger nails. I like to strip processes down, clean them, put in new parts and make them perform as best as they can. I was more of a mechanic.

MR: You don’t call yourself a consultant. Why?

PA: It’s true that I don’t generally refer to myself as a consultant, although what I do is often called consultancy. Although this is a very unfair generalisation, my thinking on consultancy goes like this. Imagine you take your car to a garage because there’s something wrong with it. You leave it with them and call back at the end of the day and are given a report that tells you what’s wrong with the car, what needs to be done to put it right and a bill for the advice. This is consultancy. What you want is a car that works, not a do–it–yourself kit. This is mechanics.